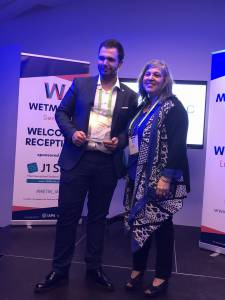 Hungarian au pair Martin Tóth (25)  was presented with the IAPA Au Pair of the Year 2018 Award during our opening reception held at the Metropol Parasol in Sevilla  during the Work Experience Travel Market and IAPA Annual Conference (WETM-IAC) 2018. 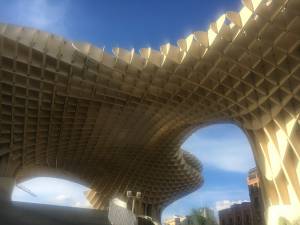 An international jury of five people had selected him from over 30 nominations.

Martin was placed by receiving agency Au Pair International from the USA. His sending agency had been Smaller Earth from the UK.

His American host family Bernosky from Houston, TX had nominated him for the award. Already the family in Washington DC that hosted him during his first au pair had suggested this exceptional young man as Au Pair of the Year.

His time with family Bernosky in Texas had started quite roughly as the family’s neighborhood was hit by hurricane Harvey. Martin had been the “rock” of the family: he didtn´t have to think twice and simply did what needed to be done. During this difficult time Martin proved what a great personality he has and how much he had immediately become part of this family.

Martin held a very passionate speech without any notes and told the audience who listened holding their breath about his first weeks in Texas and about his au pair experience in general, his wonderful, warm hearted host family who has such a big heart that they helped the whole neighborhood and simply let them all stay with them even though their own house was partly destroyed. 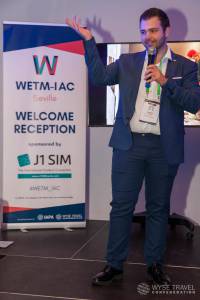 “How the Bernosky family took in two friends of (their daughter) Hanna and cared for them just like they were their own, taught me a lot about sharing and unconditional care for others. The support they provide for their children is remarkable and a great example to follow. This whole au pair experience taught me endless life lessons that I am proud to take with me wherever my future takes me. Besides gaining confidence in speaking and writing in English, visiting amazing parts of this beautiful country, I discovered my true passion for childcare”

After Martin, spoke his host mother Missy Bernosky who had accompanied him to this important event in Seville. With her emotional speech and her description of the relationship her family has built up with Martin over the last months it became very clear that Martin was indeed a well deserving winner of the Award.

“There is so much more we could say about Martin, but overall, he has shown us a loyalty and love forour family that is like no other we have felt from any au pair before. We are truly humbled by his giving nature and our family will forever be grateful for his assistance and care during the most difficult time of our lives. We feel so lucky and blessed to have had this opportunity to host Martin for his extension year!”                                                  Missy Bernosky

The audience was thrilled with their speeches and when the surprise video was played that the teenage children and the host father had made to congratulate their beloved au pair not only Martin and his host mother were moved to tears. 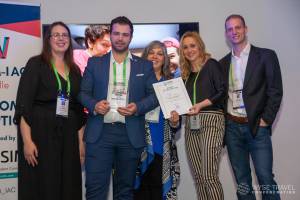 The whole au pair community congratulates you and wishes you all the best for your future. 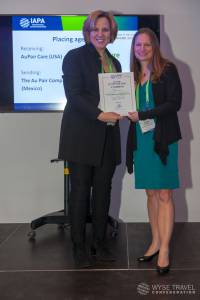 “…we learned Wendy was not just an au pair on an adventure far from home; Wendy is a part of our family – she is one of us and this is her home. …, our Wendy is defined by her calm and peace in a storm. She is a rock that the waves roll over.”

“Melanie is a true member of our family and we believe that she was meant to be here. We are grateful that she is spending a second year with us, and I hope she will continue to learn and grow and achieve her full potential while also having a great time here. We understand that Melanie may sound too good to be true and that’s only because she is.”